Writers LIVE: Cathy Scott-Clark, The Exile: The Stunning Inside Story of Osama bin Laden and Al Qaeda in Flight 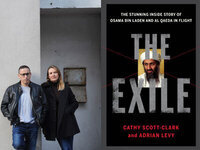 From September 11, 2001 to May 2, 2011, Osama Bin Laden evaded intelligence services and special forces units, drones and hunter killer squads. The Exile tells the extraordinary inside story of that decade through the eyes of those who witnessed it: bin Laden's four wives and many children, his deputies and military strategists, his spiritual advisor, the CIA, Pakistan's ISI, and many others who have never before told their stories. While we think we know what happened in Abbottabad on May 2, 2011, we know little about the wilderness years that led to that shocking event.

Investigative journalists Cathy Scott-Clark and Adrian Levy gained unique access to Osama bin Laden's inner circle, and they recount the flight of Al Qaeda's forces and bin Laden's innocent family members, the gradual formation of ISIS by bin Laden's lieutenants, and bin Laden's rising paranoia and eroding control over his organization. They also reveal that the Bush White House knew the whereabouts of bin Laden's family and Al Qaeda's military and religious leaders, but rejected opportunities to capture them, pursuing war in the Persian Gulf instead, and offer insights into how Al Qaeda will attempt to regenerate itself in the coming years.

Adrian Levy is an internationally renowned and award-winning investigative journalist who worked as a staff writer and foreign correspondent for the Sunday Times for seven years before joining the Guardian as senior correspondent. He has reported from South Asia for more than a decade, and now lives in London and in France.