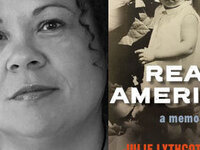 Real American by Julie Lythcott-Haims, bestselling author of How to Raise an Adult, is a deeply personal account of her life growing up as a biracial black woman in America. The only child of an African American father and a white British mother, she shows how so-called "micro" aggressions in addition to blunt force insults can puncture a person's inner life. Real American also expresses, through Lythcott-Haims' path to self-acceptance, the healing power of community in overcoming the hurtful isolation of being incessantly considered "the other."

Julie-Lythcott-Haims served as dean of freshmen and undergraduate advising at Stanford University, where she received the Dinkelspiel Award for her contributions to the undergraduate experience. She holds a BA from Stanford, a JD from Harvard Law School, and an MFA in writing from California College of the Arts. She is a member of the San Francisco Writers' Grotto.

The program will be introduced with a performance by Mohamed Tall. Mohamed Tall is Baltimore City's current Youth Grand Slam champion, former Baltimore City Poet Ambassador, as well as the 2 time Muslim Interscholastic Tournament spoken word champion. Mohamed has opened up for various entertainers such as Native Deen, the National Poet Laureate and Congressman Elijah Cummings.