Writers LIVE: Melvin A. Goodman, Whistleblower at the CIA 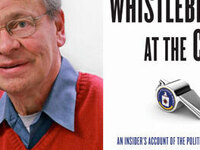 Melvin A. Goodman's long career as a respected intelligence analyst at the CIA, specializing in US/Soviet relations, ended abruptly. In 1990, after twenty-four years of service, Goodman resigned when he could no longer tolerate the corruption he witnessed at the highest levels of the agency. In 1991 he went public, blowing the whistle on top-level officials and leading the opposition against the appointment of Robert Gates as CIA director. In the widely covered Senate hearings, Goodman charged that Gates and others had subverted "the process and the ethics of intelligence" by deliberately misinforming the White House about major world events and covert operations.

In Whistleblower at the CIA: An Insider's Account of the Politics of Intelligence, Goodman tells the whole story. Retracing his career with the Central Intelligence Agency, he presents a rare insider's account of the inner workings of America's intelligence community, and the corruption, intimidation, and misinformation that lead to disastrous foreign interventions. Whistleblower at the CIA is an invaluable and historic look into one of the most secretive and influential agencies of US government--and a wake-up call for the need to reform its practices.

Melvin A. Goodman was a Soviet analyst at the CIA and the Department of State for 24 years, and a professor of international relations at the National War College for 18 years. He served in the U.S. Army in Athens, Greece for three years, and was intelligence adviser to the SALT delegation from 1971–1972. Currently, Goodman is the Director of the National Security Project at the Center for International Policy in Washington, DC, and adjunct professor of government at Johns Hopkins University. He has authored, co-authored, and edited seven books, including National Insecurity: The Cost of American Militarism; Gorbachev's Retreat: The Third World; The Wars of Eduard Shevardnadze; The Phantom Defense: America's Pursuit of the Star Wars Illusion; Bush League Diplomacy: How the Neoconservatives are Putting the World at Risk, and Failure of Intelligence: The Decline and Fall of the CIA. His articles and op-eds have appeared in numerous publications, including the New York Times, Harper's, Foreign Policy, Foreign Service Journal, The Baltimore Sun, and The Washington Post. He lives in Bethesda, MD.