Writers LIVE: Michael Fabey, Crashback: The Power Clash Between the U.S. and China in the Pacific 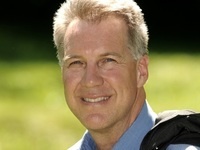 In Crashback, journalist Michael Fabey describes the "warm war" in the Pacific Ocean, a shoving match between the United States and China. The Chinese regard the Pacific, especially the South China Sea, as their ocean, and the United States insists on asserting freedom of navigation. The immediate danger is that the five trillion dollars in international trade that passes through the area will grind to a standstill. The ultimate danger: the U.S. and China will be drawn into all-out war.

Michael Fabey has had unprecedented access to the Navy’s most exotic aircraft carriers, cruisers, destroyers, aircraft, and submarines, as well as those who command them. He was among the only journalists allowed to board a Chinese war vessel and observe its operations.

In sobering detail, Crashback recounts the increasingly tense and sometimes fatal interactions between the superpowers—ones in which lifesaving decisions have to be made at every turn, and where the consequences of a wrong step can be devastating. But it also illuminates the brave and calculating characters behind the stealth cruisers, ultra-modern F-35 fighters, and futuristic laser weapons who are contending for dominance, making this perhaps the most deeply accessed work of reporting on the conflict yet.

Michael Fabey has reported on military and naval affairs for most of his career, winning the prestigious Timothy White Award and earning a Pulitzer Prize nomination. In his work for National Geographic Traveler, the Economist Group, Defense News, Aviation Week, and Jane’s, he has collected more than two dozen reporting awards. No other journalist has had as much firsthand experience of America’s naval ships and aircraft and the officers who command them.