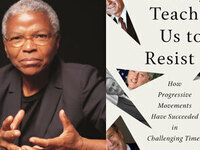 In her new book, History Teaches Us to Resist: How Progressive Movements Have Succeeded in Challenging Times, Dr. Mary Frances Berry examines instances of resistance during the times of various presidential administrations.

Despair and mourning after the election of a hostile president are part of the push-pull of American politics. But resistance to presidential administrations has historically led to positive change and the defeat of outrageous proposals, even in perilous times. And though conservative presidents require massive public protest to enact policy decisions, the same can be true of progressive ones. For instance, Barack Obama and the Indigenous protests against the Dakota pipeline is one modern example of resistance built on earlier actions. Resistance sometimes fails, but it has usually been successful, even if it does not achieve all of a movement's goals.

Dr. Mary Frances Berry is the Geraldine R. Segal Professor of American Social Thought and professor of history at the University of Pennsylvania. She is the former chairwoman of the US Commission on Civil Rights, a Distinguished Fellow of the American Society for Legal History, the author of 12 books, and the recipient of 35 honorary degrees.

The Brown Lecture Series is supported by the Eddie C. and C. Sylvia Brown Family Foundation.