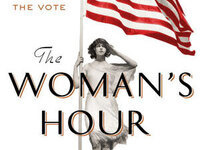 In her new book, The Woman's Hour, Elaine Weiss tells the story of the last six weeks in the fight for women's suffrage, when it all came down to one state, and in the end one man's vote.

By August 1920, 35 states had ratified the Nineteenth Amendment, 12 had rejected it or refused to vote, and one last state hung in the balance -- Tennessee. The suffragettes descended on Nashville to duke it out with their opposing forces -- politicians with careers at stake, liquor companies, railroad magnates, racists who didn't want to see black women win the vote, and the "Antis," women who vehemently opposed their own enfranchisement, fearing suffrage would bring about the moral collapse of the nation.

The Woman's Hour is a political thriller that follows three remarkable women as they lead their respective forces into the battle for -- and against -- suffrage. They all converge one hot summer for a vicious face-off replete with dirty tricks and cutting betrayals, sexist rancor, bigotry, booze, and the Bible.

Elaine Weiss is an award-winning journalist and writer whose work has appeared in The Atlantic, Harper's, The New York Times, and The Christian Science Monitor. A MacDowell Colony Fellow and Pushcart Prize Editor's Choice honoree, she is the author of Fruits of Victory: The Woman's Land Army in the Great War.