Writers LIVE: Peter B. Levy, The Great Uprising: Race Riots in Urban America During the 1960s 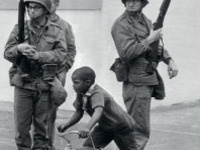 Between 1963 and 1972 America experienced over 750 urban revolts. Considered collectively, they comprise what Peter Levy terms a 'Great Uprising'. Levy examines these uprisings over the arc of the entire decade, in various cities across America. He challenges both conservative and liberal interpretations, emphasizing that these riots must be placed within historical context to be properly understood.

By focusing on three cities as case studies -- Cambridge and Baltimore, Maryland, and York, Pennsylvania -- Levy demonstrates the impact which these uprisings had on millions of ordinary Americans. He shows how conservatives profited politically by constructing a misleading narrative of their causes, and also suggests that the riots did not represent a sharp break or rupture from the civil rights movement. Finally, Levy presents a cautionary tale by challenging us to consider if the conditions that produced this 'Great Uprising' are still predominant in American culture today.

Peter B. Levy is a professor of history at York College of Pennsylvania where he teaches U.S. history. He is the author of Civil War on Race Street: The Civil Rights Movement in Cambridge, Maryland.