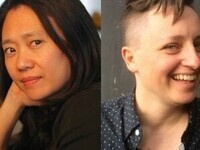 Jennifer Chang is the author of The History of Anonymity and Some Say the Lark, which was longlisted for the PEN Open Book Award. Her poems have appeared in numerous journals, including American Poetry Review, Boston Review, The Nation, Poetry, and A Public Space, and she has published essays on poetry and poetics in The Los Angeles Review of Books, New England Review, and The Volta. She co-chairs the advisory board of Kundiman, an organization that supports Asian American writers, and teaches creative writing and literature at George Washington University in Washington, D.C.

Jenny Johnson is the author of In Full Velvet (Sarabande Books, 2017). Her honors include a 2015 Whiting Award and a 2016-17 Hodder Fellowship at Princeton University. Her poems have appeared in The New York Times, Women of Resistance: Poems for a New Feminism, New England Review, and elsewhere. She teaches at the University of Pittsburgh and at the Rainier Writing Workshop's MFA Program.

Read "Again a Solstice" by Jennifer Chang.
Read "In the Dream" by Jenny Johnson.