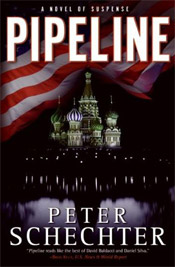 Peter Schechter reads from his new book, Pipeline: A Novel of Suspense.

Pipeline is a riveting international thriller of oil, greed, and power. Three strangers from Washington, Frankfurt, and Lima are thrown together in a maelstrom of danger and intrigue, with the fate of America and the world resting in their hands.

Peter Schechter's first novel, Point of Entry, was hailed by the Chicago Tribune as a "frighteningly believable look at a possible near-future scenario." Schechter is a seasoned political and communications consultant based in Washington, DC.