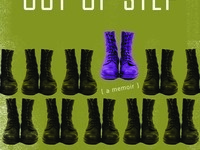 What makes a pink-haired queer raise his hand to enlist in the military just as the nation is charging into war? In his memoir, Out of Step, Anthony Moll tells the story of a working-class bisexual boy running off to join the army in the midst of two wars and the "Don't Ask, Don't Tell" era. Set against the backdrop of hypermasculinity and sexual secrecy, Moll weaves a queer coming-of-age story.

Out of Step traces Moll’s development through his military service, recounting how the army both breaks and builds relationships, and what it was like to explore his queer identity while also coming to terms with his role in the nation’s ugly foreign policy. From a punk, nerdy, left-leaning, poor boy in Nevada leaving home for the first time to an adult returning to civilian life and forced to address a world more complicated than he was raised to believe, Moll’s journey isn’t a classic flag-waving memoir or war story—it’s a tale of finding one’s identity in the face of war and changing ideals.

Anthony Moll is a Baltimore-based writer and educator. His creative work has appeared in Gertrude Journal, Assaracus, jubilat, and more. Moll holds an MFA in Creative Writing and Publishing Arts and has taught writing at both public and private universities.