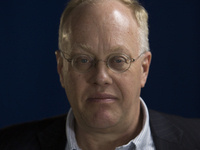 In his new book, America: The Farewell Tour, Chris Hedges provides a provocative examination of America in crisis, where unemployment, deindustrialization, and a bitter hopelessness and malaise have resulted in an epidemic of diseases of despair -- drug abuse, gambling, suicide, magical thinking, xenophobia, and a culture of sadism and hate.

According to Hedges, America is convulsed by an array of pathologies that have arisen out of profound hopelessness, a bitter despair and a civil society that has ceased to function. The opioid crisis, the retreat into gambling to cope with economic distress, the pornification of culture, the rise of magical thinking, the celebration of sadism, hate and plagues of suicides are the physical manifestiations of a society that is being ravaged by corporate pillage and a failed democracy. As the society unravels, we also face global upheaval caused by catastrophic climate change.

Hedges argues that neither political party, now captured by corporate power, addresses the systemic problem. America: The Farewell Tour seeks to jolt us out of our complacency while there is still time.

Chris Hedges is a Pulitzer Prize-winning journalist who was a foreign correspondent for 15 years for The New York Times. He previously worked overseas for The Dallas Morning News, The Christian Science Monitor, and NPR. He is the author of American Fascists, Days of Destruction, Days of Revolt, and War is a Force That Gives Us Meaning.