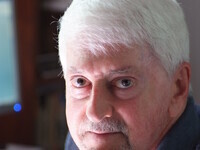 On October 16, 1859, John Brown and his band of eighteen raiders descended on Harpers Ferry. In an ill-fated attempt to incite a slave insurrection, they seized the federal arsenal, took hostages, and retreated to a fire engine house where they barricaded themselves until a contingent of US Marines battered their way in on October 18.

The raiders were routed, and several were captured. Soon after, they were tried, convicted, and hanged. Among Brown’s fighters were five African American men -- John Copeland, Shields Green, Dangerfield Newby, Lewis Leary, and Osborne Perry Anderson -- whose lives and deaths have long been overshadowed by their martyred leader and who, even today, are little remembered. Only Anderson survived, later publishing the lone insider account of the event that, most historians agree, was a catalyst to the catastrophic American Civil War that followed. Five for Freedom: The African American Soldiers in John Brown's Army is the story of these five brave men, the circumstances in which they were born and raised, how they came together at this fateful time and place, and the legacies they left behind.

Eugene L. Meyer is an award-winning journalist and author and a former longtime reporter and editor at the Washington Post. His work has also appeared in the New York Times, U.S. News & World Report, and many other national and regional publications. Meyer is also the author of Chesapeake Country (1990, 2015) and Maryland Lost and Found...Again (2003). He is a contributing editor for Bethesda magazine and lives in Silver Spring, Maryland.