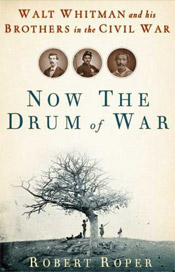 Walt Whitman worked as a nurse with wounded Civil War soldiers; his brother George served with the 51st New York Volunteers. Drawing on letters that Walt, George, their mother Louisa, and their other brothers wrote to each other, Robert Roper chronicles the experiences of this famous family enduring its long crisis alongside the anguish of the nation.

Robert Roper is a professor at Johns Hopkins University where he teaches writing. He is the author of several award-winning works of fiction and nonfiction, including Fatal Mountaineer.