Writers LIVE: Tim Mohr, Burning Down the Haus: Punk Rock, Revolution, and the Fall of the Berlin Wall 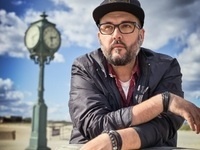 The ;conversation with Tim Mohr will be moderated by WBAL-TV anchor Andre Hepkins.

The story of East German punk rock is about much more than music; it is a story of extraordinary bravery in the face of one of the most oppressive regimes in history. It began with a handful of East Berlin teens who heard the Sex Pistols on a British military radio broadcast to troops in West Berlin in 1980, and it ended with the collapse of the East German dictatorship. When the East German punks became more numerous, more visible, and more rebellious, security forces—including the dreaded secret police, the Stasi—targeted them. They were spied on by friends and even members of their own families; they were expelled from schools and jobs; they were beaten by police and imprisoned. Instead of backing down, the punks fought back, playing an indispensable role in the underground movements that helped bring down the Berlin Wall.

Rollicking, cinematic, deeply researched, highly readable, and thrillingly topical, Tim Mohr's Burning Down the Haus brings to life the young men and women who successfully fought authoritarianism three chords at a time—and is a fiery testament to the irrepressible spirit of resistance.

Tim Mohr is an award-winning translator of authors, including Alina Bronsky, Wolfgang Herrndorf, and Charlotte Roche. He has also collaborated on memoirs by musicians Gil Scott-Heron, Duff McKagan of Guns n’ Roses, and Paul Stanley of KISS. His own writing has appeared in the New York Times Book Review, New York Magazine,and Inked, among other publications, and he spent several years as a staff editor at Playboy magazine, where he edited Hunter S. Thompson, John Dean, and Harvey Pekar, among others. Prior to starting his writing career he earned his living as a club DJ in Berlin.