An Evening with Porochista Khakpour and Mattilda B. Sycamore 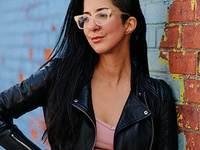 Porochista Khakpour's debut novel Sons and Other Flammable Objects was a New York Times Editor's Choice, one of the Chicago Tribune's Fall's Best, and the 2007 California Book Award winner in the 'First Fiction' category. Her second novel The Last Illusion was a 2014 "Best Book of the Year" according to NPR, Kirkus, Buzzfeed, Popmatters, Electric Literature, and many more. Among her many fellowships is a National Endowment for the Arts award. Her nonfiction has appeared in many sections of The New York Times, the Los Angeles Times, Elle, Slate, Salon, and Bookforum, among many others.

Sick is Khakpour's grueling, emotional journey - as a woman, an Iranian-American, a writer, and a lifelong sufferer of undiagnosed health problems - in which she examines her subsequent struggles with mental illness and her addiction to doctor prescribed benzodiazepines, that both aided and eroded her ever-deteriorating physical health. A story of survival, pain, and transformation, Sick candidly examines the colossal impact of illness on one woman's life by not just highlighting the failures of a broken medical system but by also boldly challenging our concept of illness narratives.

Mattilda Bernstein Sycamore is the author of a memoir and three novels, and the editor of five nonfiction anthologies. Her memoir, The End of San Francisco, won a Lambda Literary Award, and her most recent anthology, Why Are Faggots So Afraid of Faggots?: Flaming Challenges to Masculinity, Objectification, and the Desire to Conform, was an American Library Association Stonewall Honor Book. Mattilda's new novel, Sketchtasy, is out in October.

Sketchtasy brings 1990s gay culture startlingly back to life, as Alexa, an incisive twenty-one-year-old queen, and her friends grapple with the impact of growing up at a time when desire and death are intertwined. With an intoxicating voice and unruly cadence, this is a shattering, incandescent novel that conjures the pain and pageantry of struggling to imagine a future.