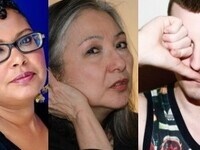 Paulette Beete's poems, short stories, and personal essays have appeared in Crab Orchard Review, Always Crashing, and Beltway Poetry Quarterly, among other journals. Her chapbooks include Blues for a Pretty Girl and Voice Lessons. Her work also appears in the anthologies Full Moon on K Street: Poems About Washington, DC and Saints of Hysteria: A Half-Century of Collaborative American Poetry (with Danna Ephland). Her work has also been nominated for the Pushcart Prize and Best of the Net. She also blogs (occasionally) at thehomebeete.com and her manuscript "Falling Still" is currently in circulation. Find her on Twitter as @mouthflowers.

Kathleen Hellen is the author of The Only Country Was the Color of My Skin (2018), the award-winning collection Umberto's Night, and two chapbooks, The Girl Who Loved Mothra and Pentimento. Nominated for the Pushcart and Best of the Net, and featured on Poetry Daily, her poems have been awarded the Thomas Merton poetry prize and prizes from the H.O.W. Journal and Washington Square Review. She has won grants from the Maryland State Arts Council and the Baltimore Office of Promotion & the Arts. Hellen's poems have appeared in American Letters & Commentary, Barrow Street, The Massachusetts Review, New Letters, North American Review, Poetry East, Prairie Schooner, Salamander, The Seattle Review, the The Sewanee Review, Southern Poetry Review, Spoon River Poetry Review, Witness, and elsewhere. For more on Kathleen visit https://www.kathleenhellen.com

Stephen Zerance is the author of Safe Danger (Indolent Books, 2018), which was nominated for Best Literature of the Year by POZ Magazine. His poems have appeared in West Branch, Prairie Schooner, Quarterly West, and Poet Lore, among other journals. He has also been featured on the websites of Lambda Literary and Split This Rock. Zerance received his MFA from American University, where he received the Myra Sklarew Award. He lives in Baltimore, Maryland. Find him on Twitter @stephnz. Instagram: stephenzerance