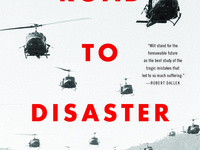 Brian VanDeMark is in conversation with George Petras of USA Today.

In Road To Disaster: A New History Of America’s Descent Into Vietnam, Naval Academy professor Brian VanDeMark looks at the cataclysmic decisions made by the “best and the brightest” through the prism of recent research in cognitive science, psychology, and organizational theory. Drawing upon decades of archival research, his own interviews with many of those involved, and a wealth of previously unheard recordings by McNamara and Clark Clifford, VanDeMark explains how those in charge exhibited unfounded overconfidence, ignored essential information, became blind to the obvious, and were illogically inconsistent, all of which ultimately led to the death of almost 60,000 Americans and more than 3 million Indochinese.

Brian VanDeMark teaches history at the United States Naval Academy, where for more than twenty-five years he has educated midshipmen about the Vietnam War. He has also been a visiting fellow at Oxford University. VanDeMark was the research assistant on Clark Clifford's bestselling autobiography Counsel to the President and the coauthor of Robert McNamara's #1 bestseller In Retrospect.

George Petras is a graphics editor and researcher for USA Today.