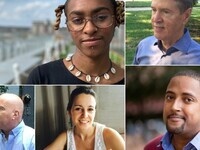 The 2019 Enoch Pratt Free Library / Little Patuxent Review Poetry Contest finalists read along with one of the contest judges and one winner of the Poetry Contest in previous years.

Jalynn Harris, the 2019 Poetry Contest winner, is a Baltimore native currently pursuing an MFA at the University of Baltimore where she is the inaugural recipient of the Michael F. Klein Fellowship for Social Justice. She is also the founder of SoftSavagePress, a press dedicated to promoting works by Black people. She received her BA in Linguistics from the University of North Carolina at Chapel Hill. Her work has appeared in Transition, Gordon Square Review, Super Stoked Words, and Scalawag Magazine.

Tom Large, 2019 Poetry Contest finalist, studied English literature at Swarthmore College and finished an MA in the Johns Hopkins Writing Seminars before shifting to the School of Medicine to train as a psychotherapist. Since 1977, he has been in private practice here in Baltimore. Although he has read and loved poetry since he was a teenager, he only began writing his own poems about five years ago. His wife, Elizabeth, and he have been married for 51 years and live in Baltimore City. They have one daughter and two granddaughters.

Sara Burnett, 2019 Poetry Contest finalist, is the author of the chapbook Mother Tongue (Dancing Girl Press, 2018). Her poems have appeared in Barrow Street, Poet Lore, SWWIM, The Cortland Review, and elsewhere. She holds an MFA in poetry from the University of Maryland and an MA in English Literature from the University of Vermont. She lives in Silver Spring, Maryland, with her family.

Joseph Ross, who won the Poetry Contest in 2012, is the author of four books of poetry: Raising King (forthcoming in 2020), Ache (2017), Gospel of Dust (2013), and Meeting Bone Man (2012). His poems have appeared in many places including The Los Angeles Times, Xavier Review, Southern Quarterly, Poet Lore, and Drumvoices Revue. In the 2014-2015 school
year, he served as the 23rd Poet-in-Residence for the Howard County Poetry and Literature Society. He teaches English at Gonzaga College High School in Washington, D.C., and writes regularly at www.JosephRoss.net.

Steven Leyva, Little Patuxent Review editor, was born in New Orleans, Louisiana, and raised in Houston, Texas. His poems have appeared or are forthcoming in 2 Bridges Review, Fledgling Rag, The Light Ekphrastic, Cobalt Review, and Prairie Schooner. He is a Cave Canem fellow, the winner of the 2012 Cobalt Review Poetry Prize, and author of the chapbook Low Parish. Steven holds an MFA from the University of Baltimore, where he is an assistant professor in the School of Communication Design.

Read "Phillis Wheatley questions the quarter" by Jalynn Harris and "If Mamie Till Was the Mother of God" by Joseph Ross.
Read "Bell Buoy" and "Hands" by Tom Large.
Read "Primary Source" and "Student Handbook" by Sara Burnett.
Read "'I know you're never gonna wake up'" and "Supremacy" by Steven Leyva.