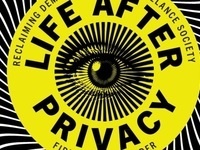 Firmin DeBrabander is in conversation with columnist Dan Rodricks.

With Life after Privacy: Reclaiming Democracy in a Surveillance Society, Professor of Philosophy at Maryland Institute College of Art Firmin DeBrabander explores the role that privacy does and does not play in today’s world. Even though people do know that their every move is watched and recorded online, why do they still share everything that happens to them on social media and are so careless about virtually sending along their own personal data? We no longer have privacy, but do we really need it or want it?

DeBrabander aims to understand the prospects and future of democracy without any privacy (or very little of it) within a society that does not know how to appreciate and protect it.

Firmin DeBrabander is Professor of Philosophy, Maryland Institute College of Art. He has written commentary pieces for a number of national publications, including the New York Times, Washington Post, the Atlantic, LA Times, Salon, Aeon, Chicago Tribune, and The New Republic. Professor DeBrabander is also the author of Do Guns Make us Free?, a philosophical and political critique of the guns rights movement.