Brown Lecture Series: Anthony Ray Hinton, The Sun Does Shine: How I Found Life and Freedom on Death Row 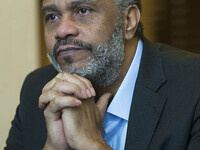 Anthony Ray Hinton is in conversation with Jenny Egan about his book and the Equal Justice Initiative.

Anthony Ray Hinton survived for 30 years on Alabama's death row. His story is a decades-long journey to exoneration and freedom. In 1985, Mr. Hinton was convicted of the unsolved murders of two fast-food restaurant managers based on the testimony of ballistics experts for the State who claimed that the crime bullets came from a dusty revolver found in Mr. Hinton's mother’s closet. Without the benefit of a competent expert to challenge the State’s theory (Mr. Hinton’s lawyer hired a ballistics expert who was blind in one eye), an all-white jury convicted Mr. Hinton and he was sentenced to death. After years of petitioning to have the revolver re-analyzed, three independent experts concluded that the bullets could not have been fired from his mother’s revolver. With the assistance of the Equal Justice Initiative, led by attorney Bryan Stevenson, Mr. Hinton was freed in 2015. Since his release, Mr. Hinton has traveled the world sharing his story and discussing the changes that need to be made to prevent similar injustices from happening to other people. In 2018, Mr. Hinton published The Sun Does Shine: How I Found Life and Freedom on Death Row, which was selected for Oprah’s Book Club and is a New York Times bestseller. In 2019, he was awarded an honorary doctorate from St. Bonaventure University.