Writers Cribs! Ron Cassie, If You Love Baltimore, It Will Love You Back 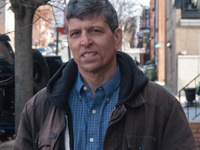 Join us for a conversation and short tour with Ron Cassie to launch his book, If You Love Baltimore, It Will Love You Back: 171 Short but True Stories. The conversation will be moderated by Rafael Alvarez.

Ron Cassie is a senior editor at Baltimore magazine, where he’s won national awards for his coverage of the death of Freddie Gray, sea-level rise on the Eastern Shore, and the opioid epidemic in Hagerstown. He reported from Haiti in the days following the tragic earthquake, New Orleans in the aftermath of Hurricane Katrina, and from Uganda as part of a humanitarian relief effort. His work has appeared as a notable selection in The Best of American Sports Writing, in collaboration with the Pulitzer Center, at CityLab, Newsweek, Huffington Post, Grist, The New York Daily News,The Baltimore Sun, several alternative weeklies, including Baltimore City Paper, and Urbanite, where he served as editor-in-chief before coming to Baltimore. He has been a finalist for the Folio and City and Regional Magazine Association Writer of the Year awards. He is a two-time Religion Writer of the Year runner-up. He teaches writing at Towson University and holds masters degrees from The Johns Hopkins University and Georgetown University, where he is pursuing a doctorate degree. Prior to becoming a full-time journalist, he spent almost two decades swinging a hammer, riding a bike, and pouring drinks for a living.