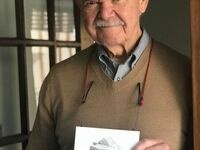 Join us for a conversation and short tour with C. Fraser Smith.

C. Fraser Smith was a reporter for the Jersey Journal and the Providence Journal before his decades-long affiliation with the Baltimore Sun as a reporter and then Sunday op-ed columnist. In addition, while in Baltimore, he became a commentator for WYPR, the Baltimore affiliate of National Public Radio, as well as a weekly columnist for The Daily Record, a regional business newspaper based in Baltimore.

The Daily Miracle, A Memoir of Newspapering is his fourth book.