Home /  Books & More / Live From the Pratt / An Afternoon of Poetry: Readings… 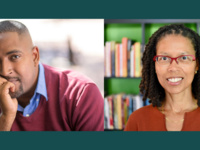 Steven Leyva was born in New Orleans, Louisiana and raised in Houston, Texas. His poems have appeared or are forthcoming in 2 Bridges Review, Scalawag, Nashville Review, jubilat, Vinyl, Prairie Schooner, and Best American Poetry 2020. He is a Cave Canem fellow and author of the chapbook Low Parish and author of The Understudy’s Handbook which won the Jean Feldman Poetry Prize from Washington Writers Publishing House. Steven holds an MFA from the University of Baltimore, where he is an assistant professor in the Klein Family School of Communications Design.

Evie Shockley is a poet and scholar. Her most recent poetry collections are the new black (Wesleyan, 2011) and semiautomatic (Wesleyan, 2017); both won the Hurston/Wright Legacy Award, and the latter was a finalist for the Pulitzer and LA Times Book Prizes. She has received the Lannan Literary Award for Poetry, the Stephen Henderson Award, the Holmes National Poetry Prize, and fellowships from the Radcliffe Institute for Advanced Study and Cave Canem. Shockley is Professor of English at Rutgers University.