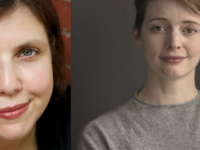 In an exhilarating tale of colliding worlds, Emily St. John’s The Glass Hotel paints a breathtaking portrait of greed and guilt, love and delusion, and the infinite ways we search for meaning in our lives. In Jenny Offill’s funny and urgent Weather, the foreboding sense of doom commands a family and presents a nation in crisis, and how we weather it. The authors will be in a conversation moderated by Marion Winik, author of The Big Book of the Dead.

Jenny Offill is the author of the novels Last Things (a New York Times Notable Book of the Year and a finalist for the L.A. Times First Book Award); Dept. of Speculation, which was shortlisted for the Folio Prize, the Pen Faulkner Award and the International Dublin Award; and most recently Weather, an instant New York Times Bestseller. She lives in upstate New York and teaches at Syracuse University and in the low residency program at Queens University.

Emily St. John Mandel's five novels include The Glass Hotel and Station Eleven, which was a finalist for a National Book Award and the PEN/Faulkner Award and has been translated into thirty-two languages. She lives in New York City with her husband and daughter.

University of Baltimore professor Marion Winik is the author of The Big Book of the Dead and winner of the 2019 Towson Prize for Literature. Among her ten other books are First Comes Love and Above Us Only Sky. Her award-winning Bohemian Rhapsody column appears monthly at Baltimore Fishbowl, and her essays have been published in The New York Times Magazine, The Sun, and elsewhere. A board member of the National Book Critics Circle, she writes book reviews for People, Newsday, The Washington Post, and Kirkus Reviews; she hosts The Weekly Reader podcast at WYPR. She was a commentator on NPR for fifteen years; her honors include an NEA Fellowship in Creative Nonfiction. More info at marionwinik.com.

The Writer's Room is a new Festival highlight designed to engage festival attendees, who are also writers, in an informal conversation with the featured guest authors.