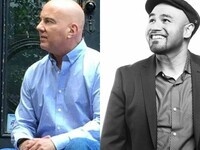 Poets Joseph Ross and Michael Torres read from and discuss their new books.

Joseph Ross is the author of four books of poetry: Raising King (2020), Ache (2017), Gospel of Dust (2013), and Meeting Bone Man (2012). His poems appear in many places including The New York Times Magazine, The Los Angeles Times, Poet Lore, Xavier Review, Southern Quarterly, and Drumvoices Revue. He has received multiple Pushcart Prize nominations and won the 2012 Pratt Library / Little Patuxent Review Poetry Prize. He recently served as the 23rd Poet-in-Residence for the Howard County Poetry and Literature Society in Howard County, Maryland. He teaches English and Creative Writing at Gonzaga College High School in Washington, D.C., and writes regularly at www.JosephRoss.net.

Michael Torres was born and brought up in Pomona, California, where he spent his adolescence as a graffiti artist. His debut collection of poems, An Incomplete List of Names (Beacon Press, 2020), was selected by Raquel Salas Rivera for the National Poetry Series. His honors include awards and support from the National Endowment for the Arts, the McKnight Foundation, the Bread Loaf Writers’ Conference, CantoMundo, VONA Voices, the Minnesota State Arts Board, the Jerome Foundation, the Camargo Foundation, and the Loft Literary Center. Currently he’s an Assistant Professor in the MFA program at Minnesota State University, Mankato, and a teaching artist with the Minnesota Prison Writing Workshop. Visit him at: michaeltorreswriter.com.

Read "On John Coltrane's 'After the Rain'" by Joseph Ross.
Read "Stop Looking at My Last Name Like That" by Michael Torres.