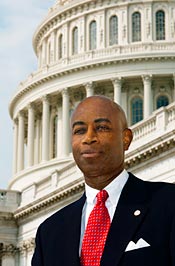 In June, 2003, Rear Admiral Barry C. Black was elected the 62nd Chaplain of the United States Senate. Prior to going to Capitol Hill, Chaplain Black served in the U.S. Navy for more than 27 years, ending his career as the Chief of Navy Chaplains.

A native of Baltimore, Chaplain Black is an alumnus of Oakwood College, Andrews University, North Carolina Central University, Eastern Baptist Seminary, Salve Regina University, and United States International University. He holds a Doctorate degree in ministry and a Ph.D. in psychology and has received numerous awards and service medals. He is the author of From the Hood to the Hill: A Story of Overcoming.