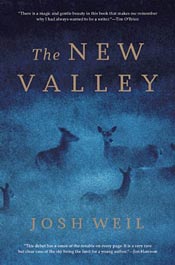 Josh Weil's The New Valley, published last year, was honored with a "5 Under 35" National Book Award and was a New York Times Editors Choice selection. It recently was honored with the 2010 New Writers Award in Fiction from the Great Lakes Colleges Association.

Set in the hardscrabble hill country between West Virginia and Virginia, the three linked novellas open up the private worlds of three very different men as they confront love, loss, and their own personal demons.

Weil's fiction has been published in Granta, American Short Fiction, Narrative, and Glimmer Train. He has written nonfiction for The New York Times, Granta Online, and Poets and Writers. Since earing his MFA from Columbia University, he has received a Fulbright grant, a Writer's Center Emerging Writer Fellowship, the Dana Award in Portfolio, and fellowships from the Bread Loaf and Sewanee Writers' conferences. As the 2009 Tickner Fellow, Josh Weil is the writer-in-residence at Gilman School in Baltimore.